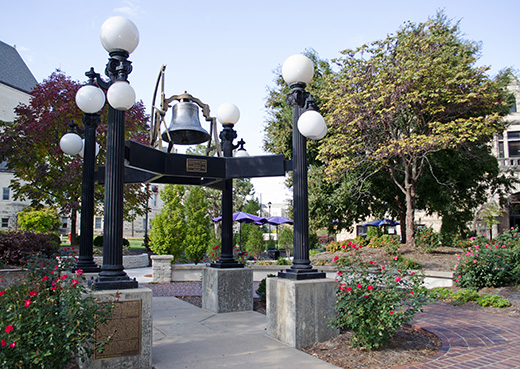 Older than all the buildings on the campus of Kansas State University, the Bluemont Bell is a rare remnant of the University's heritage. According to documents from the University archives, Bluemont Central College, originally located a mile west of the current campus was in need of a bell to call the students to class. Isaac Goodnow, co-founder of Bluemont Central College, solicited funds from a wealthy easterner, Joseph Ingalls, to fund the bell. Ingalls provided $175 for the bell and $75 for the shipping in exchange for having his name engraved on the side of the bell. In December 1861, the 513-pound bell arrived in Manhattan after traveling by train and wagon from Maine. The inscription on the bell reads, "Gift to Bluemont College by Joseph Ingalls, 1861."

After Bluemont Central College was turned over to the state of Kansas, its buildings were closed. The entire college was moved to the current campus location. In 1875, after the demolition of the main Bluemont College building, the bell was installed in the Farm Machinery Hall (now Leasure Hall) The bell was moved to the tower of Anderson Hall in 1892 where it remained for over a hundred years. The familiar peal of the bell could be heard across the prairie for five or six miles, according to the archives, and only rang late once during its active service. In 1966 an electronic carillon bell system was given to the University and installed in the tower of Anderson Hall. The bell fell silent from that time forward, only being officially rung in 1985 to commemorate the death of former K­ State President Milton Eisenhower.

In the tower of Anderson Hall, the bell was forgotten until disaster struck in 1993. In August of that year, lightning struck the southern tower of Anderson, causing considerable damage. While repairs and restoration of Anderson Hall were underway, the Legislative Joint Committee on State Building Construction was invited to inspect the damages. Some of the committee members, who were K-State graduates, recalled the main tower of Anderson had been opened to students at various times in the past. The door to the tower was opened, at their request, and the group discovered the bell at the top of the tower. Cleaning revealed the inscription from Joseph Ingalls. The Bluemont Bell had been rediscovered.

In February of 1995, the Bluemont Bell was removed from the tower of Anderson Hall for cleaning and installation in a new location on campus. Thanks to the generous gift of the Richard Hause family, as well as the efforts of Dean Michael Holen, the College of Education, and Chimes Junior honorary, the Bluemont Bell was readied to be placed on public display between Bluemont, Dickens and Holton Halls. The Hauses' gift to the University is in recognition of the retirement of Dr. Richard Hause after 29 years of teaching in the College of Education in Bluemont Hall. Dr. Hause is widely recognized as an outstanding educator who fired the imagination of his students toward the quest for excellence of thought, speech and the written word.